Although Space Geomatica P.C. is a relatively new SME, it presents a significant track record in participation in several projects and activities. An indicative list follows: 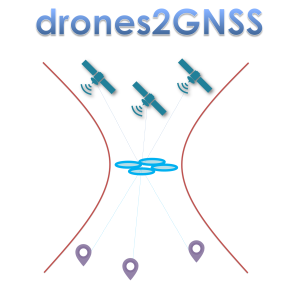 Space Geomatica P.C. leads a national consortium for the implementation of the project: ‘Drones2GNSS: UAV enabled precision measurements in obstructed environments”. The consortium consists from the leading Greek company in distribution of surveying and environmental sensors, METRICA S.A. and a research institute namely SenseLab research@Technical University of Crete.

The project aims to design, implement and launch into the market a working prototype of the Drones2GNSS idea which has been awarded as “The most innovative application idea for Galileo Initial Services” by the European GNSS Service (GSA) back in 2016.

The objective is the develop a platform which will enhance the positioning accuracy of GNSS (Global Navigation Satellite Systems) in obstructed environments. These environments degrade the accuracy of traditional GNSS surveying as visibility to GNSS satellites is blocked by high buildings, vegetation, etc.

The operations principle is that a prototype Unmanned Aerial System equipped with as less sensors as possible aims towards the unknown point (whose absolute coordinates are to be determined) on the ground. The goal is to transfer the positioning accuracy of the UAV itself (as it flies in higher altitude the visibility towards GNSS satellites is significantly improved) to the ground.

To accomplish this several architectures mainly regarding the UAV payload are to be designed and implemented: using only one camera, using stereo-camera, using a laser range finder on-board and at only one UAV position, employing the multi-lateration technique, etc. The commercial goal is to launch into the market either a collaborative platform to existing UAVs and/or integration of this platform with a prototype UAV.

The project is co‐financed by the European Union and Greek national funds through the Operational Program Competitiveness, Entrepreneurship and Innovation, under the call RESEARCH – CREATE – INNOVATE (project code:Τ1EDK-03209).